Looking to escape responsibility for a couple of hours? Come join “a giggle of Mums!”

That is how comedian and mother-of-six Jenny Wynter describes a gathering such as the Funny Mummies Comedy Gala on Sunday 20th September at the Farmhouse St George.

Wynter, an award-winning comedian in her own right, launched Funny Mummies as a mission to improve mothers’ mental health through comedy and laughter.

“When I became a parent I read all the books, and quickly realized, to my horror, that they skipped the chapter in What to Expect When You’re Expecting on gob-smacking darkness,” she joked.

“Laughter and comedy were my life-rafts. They still are.

“It’s made me realise that laughing isn’t just a luxury, it’s life’s epidural.,

“It’s cathartic, therapeutic and makes us feel less alone. Which, as mothers, is absolutely vital if we’re going to be of any use to anybody!”

“I’m just so thrilled to see women coming together and having a fantastic, side-splitting time doing it. That we get to have fun and work out our abs without planking is a total win-win.”

The Funny Mummies Comedy Gala will open doors at 5:00pm at The Farmhouse-St George. Bookings are required and can be made at the venue or by calling 4625 3605. 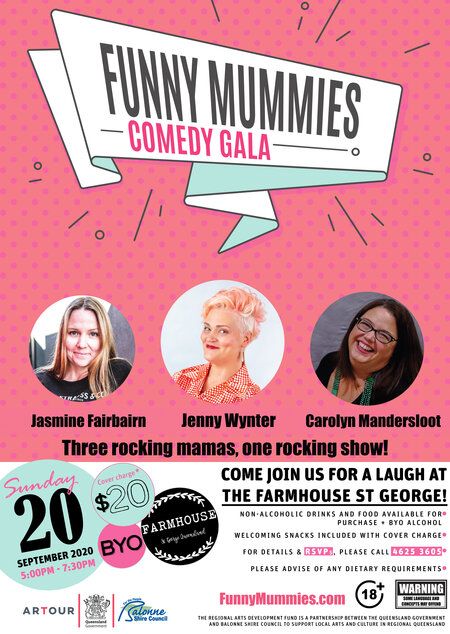