Sometimes an idea – no matter how worthy – can seem to take forever to go from a thought to a completed project.

But others can happen seemingly in the twinkle of an eye.

Such is the story of the St George Blue Tree Project, part of a national campaign to promote conversations on mental health and suicide prevention.

The Blue Tree Project’s aim is to spread the message by spreading the paint that “It’s OK not to be OK.” to help break down the stigma which still exists in relation to mental health.

Currently there are more than 520 blue trees spread throughout Australia, and now the second one in Balonne has just been completed.

Lesley Tattam raised the idea of painting a tree in St George blue like the one at Dirranbandi with Aboriginal Housing Chairperson Adam Osborne on a Wednesday, Adam took it to Balonne Shire Council Mayor, Cr Samantha O’Toole,  the following day and by the Friday a tree in Cavanagh Park, on the banks of the Balonne River,  was turned blue.

“It was just amazing that Council had been thinking the same thing and even had chosen the same tree as Lesley had picked out,” Adam said.

Adam said many of the young people who participated in painting the tree had experienced the loss of family members to suicide over the years.

Lesley said he had been struck by the significance of the blue tree on the road to Dirranbandi and was keen to see the message spread further throughout the Shire.

“When I saw it, I asked people what it was about and when I understood that I thought it would be really good for here (St George) as well.”

Fellow participant Chris Oliver said he became involved to pay respect to members of his family and saw it as an important part of his own healing journey. 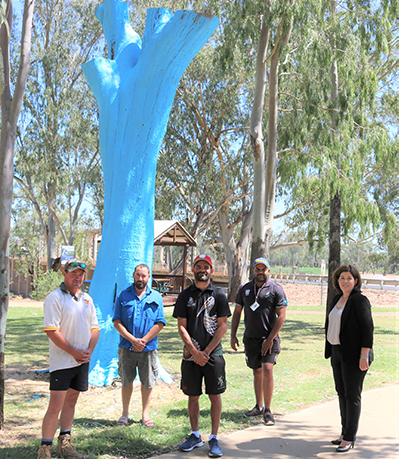 Adam said the chosen site near the river was also significant as he knew many young people who visited the area when they wanted to spend some time alone.

“I think everyone involved would like to see the tree lead to people being willing to have that conversation and to know that they are not alone and to not be afraid to ask for help.”

“Many tourists also come here so, hopefully, many more people will become aware of the need to be willing to have those conversations.”

Cr O’Toole said she was delighted when Adam approached her with the idea given it had already been on Council’s radar.

“Council is indebted to Adam and his team for being so quick to take up the challenge of finding a suitable, and high profile, site and then completing the task of painting the tree in a few short days.”

“Council is now looking at how we can light the tree to ensure its message can be seen both day and night.

“There is no doubt that mental health awareness and suicide prevention are becoming important topics in many Australian communities, and particularly those in rural and remote areas such as our own.

“This is just one way Council and its community can help shine a spotlight on this issue.”