Balonne Shire Mayor Cr Samantha O’Toole has joined calls for Mungindi residents to be free to travel to Moree to access supplies and services following a devastating fire on Tuesday night, which wiped out three local businesses. 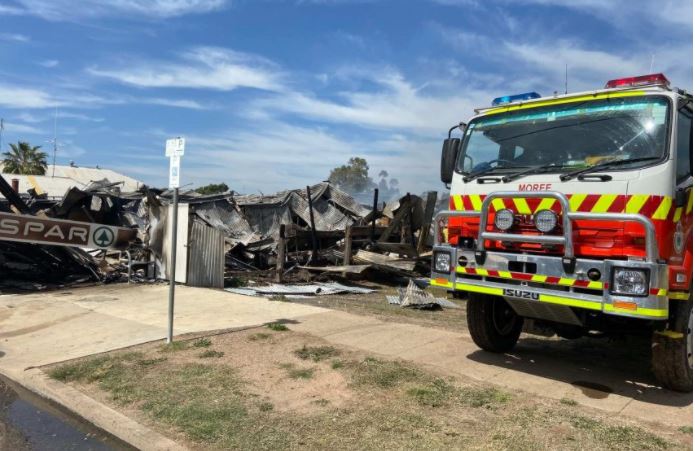 Cr O’Toole said if New South Wales residents of the town currently travel to Moree for groceries, they have to quarantine for two weeks prior to crossing into the Queensland side of the Border Zone because of existing restrictions.

“This has obvious impacts for many residents, including hospital staff, given the majority live in New South Wales,” she said.

“While I understand that assistance is being offered, it will be several days before any alternative facility is up and running and a relaxation in the Border Zone rules – even for a short time – would prove beneficial.”

Cr O’Toole also said Balonne Shire Council remains in constant contact with leaders in Mungindi and the Moree Plains Shire Council in the wake of the fire which destroyed the town’s only supermarket, butcher’s shop and a local dress shop.

“I have told both leaders that if they need assistance from the Local Disaster Management Group (LDMG) or Balonne Shire Council in the days and weeks ahead, to reach out to us. They both were grateful for the contact and the offer,” she said.

Cr O’Toole said Mungindi Hospital Director of Nursing Ann-Margaret Jakins joined a scheduled LDMG meeting on Wednesday morning and expressed some concern about the resupply of food for the Mungindi hospital, but felt they could establish an emergency supply chain from St George.

“Initially Mungindi had issues around food supply for the broader community, and the supply of prescriptions,” Cr O’Toole said.

“Care Balonne has coordinated hampers with fresh fruit, vegetables and meat which will be delivered later today.”

Cr O’Toole said she was pleased the New South Wales State Government had given the Moree Plains Shire Council $100,000 to seed fund an alternative supermarket location in the former Services’ Club building.

“Moree Plains Shire Council will be working with the Mungindi Progress Association to get that up and running as soon as possible,” she said.

“In the short-term, Woolworths Moree has also agreed to deliver groceries to Mungindi.”