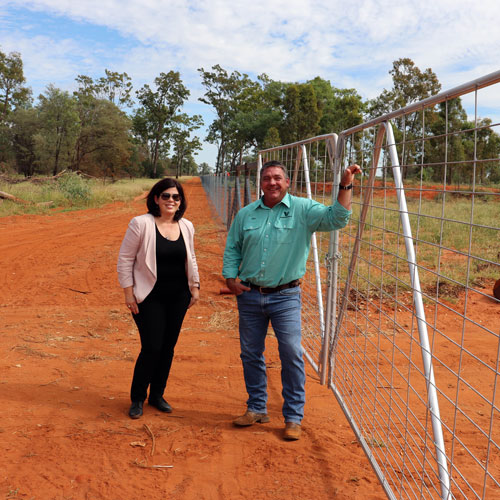 Mayor Samantha O’Toole met with Rick Cuffe of Kimcey (pictured) to mark the occasion of the first fence being completed under the scheme. Balonne Shire is the second Queensland council to offer a special rate scheme to landholders wanting to construct wild dog exclusion fencing.

Mr Cuffe said his family was looking forward to getting back into sheep once their property was completely fenced.

“We only have 5km of fencing left to do on the western side of the property and then we’ll let the country recover before bringing sheep on to it in about six months,” he said.

“We were into cattle and destocked due to the drought, but now the new fence has gone up we can get back into meat sheep.

“We’re looking forward to having sheep back on this property as now we will be able to keep them in and the dogs out. It has given us a brighter future.

“We have pimelea on our country which isn’t ideal for cattle, but meat sheep eat anything and this fence has changed the whole game.”

Mr Cuffe said the Council scheme was really good as it did not differentiate between cattle or sheep.

“A lot of other schemes had a preference for those already running sheep, so taking part in this scheme was an absolute no brainer,” he said.

“The lambing rates here are really good – with favourable seasons you can get three lambings in two years which means we’ll finally start to see an income.

“Council’s scheme fitted in with our core operation as we are not making any money at the moment and the deferred payments definitely help. Once we’ve stocked with sheep we’ll have money coming in to pay back the Council loan.”

Cr O’Toole said Council had discussed the scheme in depth before deciding to go ahead.

“This was a big commitment for a small shire such as ours and we needed to be sure it would be viable for Council and the region before we approved it,” she said,

“I’m really pleased with the response we have had from our producers and proud to have been a part of the Council that made it a reality.

“Most producers were happy with this opportunity and very happy with a 20-year loan at less than 2% interest.

“Without this scheme there would be many producers who would not have the opportunity or finances to fence off their property to wild dogs, so it was a win-win situation all around.”

In the first round of the Special Rate Scheme 23 producers representing 23 properties in the Shire signed up. To date Round 1 applications have seen Council spend $3.174 million which will build 397.5km of exclusion fencing.

Australian accounting firm Hall Chadwick has calculated that for every $ 1 million Council spends, matched with a co-contribution in kind from landholders, such as fence construction, there would be an approximate increase of $1.313 million to the Gross Regional Product value per year.

“This is the return we hoped to see for our region,” Cr O’Toole said. “By boosting our economy we will see more jobs and more residents taking advantage of the opportunities available to them.”

Round 2 of the Council Special Rate Scheme closed on 18 April 2020 and 16 applications are being assessed by a panel.

The scheme is not the only fund supporting building wild dog exclusion fences in the Shire, with government grants also offering help to producers.

“There are a number of funding streams available which, together with clusters and private fencing efforts, could see about 75 per cent of the shire fenced,” the Mayor said.

“We have had 10 producers who were eligible to access fencing funding under the Community Combating Pest and Weeds Initiative (CCPWI) and 35 producers under the Murray Darling Basin Economic Development Program (MDBEDP).

“There is about $14.5 million available from the Special Rate Scheme and grants for Wild Dog Exclusion Fencing which would fence about 2000-2400km.

Currently the total amount of fencing to be constructed in the Balonne Shire is 1579.3km under the following schemes, creating a predicted 153 employment opportunities during construction and 184 throughout the operational phase, once the WDEF sees its full potential:

Cr O’Toole congratulated all those participating in these schemes.

“I congratulate Rick Cuffe and his family, and the many landholders in the Shire who are, despite seven years of drought, a recent flood, and now Corona virus, rolling up their sleeves and working on a brighter economic future in Balonne Shire,” she said.